Fair and Reasonable Royalty Rate Determination – When is the 25% rule applicable?

What is in some general sense fair and reasonable in royalty rate determination is not clear despite (and maybe partly also because) of a longstanding debate. As often in complex uncertain situations simple rules of thumb then tend to emerge and over time set some standard rule of reason and fairness. The so called “25% rule” is a well-known example. Its rationales and practical use have been widely discussed. (See in particular Goldscheider 1995, 2002 and Razgaitis 1999, 2003.) The rule has some variants but essentially says that a license buyer (licensee) should pay 25% of his operating profit before depreciation and taxes (and before royalties) in royalties to the license seller (licensor) for an exclusive license.

The purpose of this article is to provide a general but still simple approach to a fair and reasonable royalty rate determination and especially demonstrate when the 25% rule is applicable. The article starts with the simplest case of an exclusive license deal with discounting and uncertainty ignored. It is then shown that the logic of the basic general rule – of which the 25% rule turns out to be a special case- is not significantly changed when accounting for discounting and uncertainty (and thereby risk), at least under reasonably simplifying assumptions. 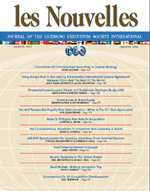