“It will be highly interesting to see what roles innovation and IP will play in this geo-political game.”

A patent’s lifetime ago Ove Granstrand published The Economics and Management of IP, which turned out to be one of the most cited publications in the area. Since then he has worked on another book in the same area, that recently came out: The Evolving Properties of Intellectual Capitalism: Patents and Innovations for Growth and Welfare. Much has happened since then, and much more will happen in the 20 years to come. 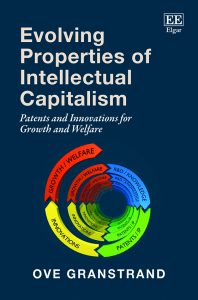 In this new book Ove tries with a Swedish outlook to put innovation and IP in the current context of a global economy, driven as fast as ever by new technologies and innovations with new IP savvy players from Asia joining in the driver’s seat, notably China, building up large portfolios of IP resources along with financial and physical ones. International competition has again turned into competition between economic systems – market-led capitalism as in the US against state-led capitalism as in China. It will be highly interesting to see what roles innovation and IP will play in this geo-political game. More and most importantly however, is to see how innovations and IP can be used to meet all the technology-related global challenges. Will capitalist institutions like markets, entrepreneurship and property rights as we know them be sufficient? Probably not. Will they even be necessary? Most likely, but evolved. So at the same time as the intellectual properties in the capitalist economy evolve, we have to evolve the properties of intellectual capitalism.