During an Industrial and Corporate Change conference at the University of California, Berkeley in December 2016, a roundtable discussion on “The Legacy of Nathan Rosenberg and the Importance of Economic History” was held on December 12th, 2016. The discussion was chaired by Professor David J. Teece and included Professors David C. Mowery whose introductory comments form the basis of the present Introduction to this Nathan Rosenberg Memorial Issue. It also included roundtable interventions by Professors Kenneth Arrow, Giovanni Dosi, Ove Granstrand, Richard R. Nelson, and Gavin Wright. The following text constitutes a revised version of the contributions by each participant. 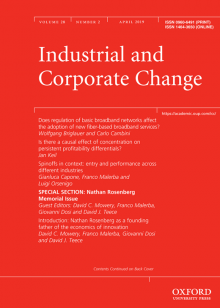